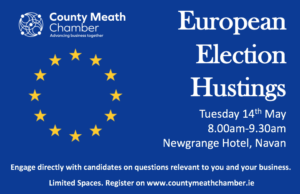 Meath Chamber invite the business community in Meath to the Meath European Election Hustings at which you will hear from a number of the candidates running to represent the Midlands North West in the European Parliament. You will hear directly from those who are seeking to represent you in the European Parliament, and you will be given an opportunity to engage directly with the candidates with questions that are relevant to you and your business.

The European elections this May could be the most devisive yet in determining the future direction of Europe. It is vitailly important that Meath businesses and citizens think seriously about the kind of Europe they want to be a part of and elect candidates who will represent Ireland’s interests as the Future of Europe debate evolves.

Meath Chamber (as part of the Chambers of Commerce network across Ireland) want a Europe that is open for business, and a Europe that creates jobs and growth. Our Chambers Manifesto for Europe calls for; A Europe that invests in its cities and regions, An ambitious global trade agenda that delivers for all, A competitive and co-operative approach to taxation, A fully connected Digital Single Market and A supportive framework for a more sustainable circular economy.